For Konrad Adenauer, the great tragedy of German history was that Germany had never had true friends. Through his policy of European integration and establishing Germany as a part of the Western community of nations, the first German Chancellor made a significant contribution to the fundamental change, in the past 70 years, in this description of Germany’s foreign policy isolation. Today, Germany is an integral part of the European Union and NATO. To a large extent, Germany owes its freedom, security, and prosperity to a close-knit network of neighbours, friends and partners all over the world. Cultivating these partnerships, deepening European integration and strengthening ties to the West is thus just as important today as it was in Adenauer’s time. It is, however, not enough.

At a time when the European Union and the transatlantic relationship are being challenged more than ever, a time when multilateral institutions and rules are being questioned, a time when the liberal world order is under pressure from inside and outside and there is already talk about a new world disorder1 – at a time like this, German foreign policy must also focus on strengthening value-based partnerships beyond the EU and NATO. Some of these partnerships are already firmly established, while others need to be explored, re-established and expanded, because the liberal world order will only have a chance if we can gain a sufficient number of allies in the fight for freedom, democracy and the rule of law. Even this, however, is not enough.

In a complex, globalized world with multiple interdependencies, Germany, in order to assert its interests, often has to rely on working with partners who are far from sharing the same values or who cannot be called friends by any stretch of the imagination. Examples include pipeline construction projects with Russia, foreign trade with China, or security issues with Saudi Arabia. The contradiction between values on the one hand and interests on the other hand, which is often construed in German foreign policy discourse, is misleading insofar as asserting certain values can, of course, also be an interest. However, it is also true that Germany’s foreign policy interests are not limited to values and that, at least given the current state of play, cannot be realized through an alliance of value-based partnerships and friends alone. Therefore, in addition to strengthening transatlantic relations, deepening European integration and exploring new value-based partnerships, German foreign policy must also focus on identifying which interests can be implemented with which partners.

That is why this project has set itself the task of creating a Partner-Atlas for German foreign policy that is designed to serve as a reference work that explores, by highlighting specific examples, which foreign policy interests can be realised with which international partners. The Atlas is intended to bring structure into the debate around Germany’s partners and interests and to make available a tool for political decision-makers and those working with them to help them navigate different subject areas and regions of the world as quickly as possible.

(1.) Strengthening a values and rules-based world order
(2.) Safeguarding our prosperity via free trade and innovation
(3.) The security and stability of Europe, its neighbourhood, and other regions of the world
(4.) Securing essential natural resources and protecting the climate
(5.) Regulating global migration flows

While inferring and defining key German foreign policy interests is indispensable before existing or potential partnerships can be reviewed for their benefit to one or more of these interests, it is not the main focus of this project. That is why this definition of interests is quite deliberately a definition on which a consensus can be reached and which is as generally acceptable and intelligible as possible. Simply put, it can be broken down into five keywords:values, prosperity, security, resources and migration.

On the basis of these five interests, the project sets out to explore which interests are most likely to be realized with whom, that is, with which partner countries. Countries that are members of the European Union and/or NATO are considered “natural partners” and are deliberately excluded from this analysis. Instead, the project focuses exclusively on partnerships beyond the EU and NATO.

The term “partner“ has been chosen very deliberately. It is supposed to cover the broadest possible range of bilateral relations, from close value partnerships to pragmatic strategic alliances. The structure of the project is based on the five above-mentioned foreign policy interests and on the following five world regions:

In a first step, all potential partner countries are identified for each interest and for every region of the world. The subsequent analysis then only discusses one of these countries, which merely serves as a case study for value-based partnerships in Latin America, security partnerships in Asia, or migration partnerships in sub-Saharan Africa, etc. The decision as to which of the potential partner countries was chosen for the analysis is based on a wide variety of considerations and does not always allow to draw conclusions about the “importance” of the respective partner country. This applies in particular to the many potential partner countries that are mentioned in the project but not analysed in detail. They are not left out because other countries are more important or are even better partners for the realization of German interests. They are left out because, in a project like this, choices inevitably have to be made, not least because the success of the project also depends on finding the right mix: the right mix between the “usual suspects”, some rather surprising candidates, the “big players” of the respective world regions as well as the many “small players” that are often eclipsed by the former.

Especially when contrasting value-based partners with partner countries that are key for realizing the other interests, it needs to be emphasized that the Partner-Atlas is not about dividing the world into good and evil. On the contrary. One of the project’s main goals is to demonstrate how complex the network of different interests, values and eligible partner-countries really is for German foreign policy. The value of putting individual countries into different categories is primarily heuristic, and should not, of course, be understood as a final judgment.

The fact that additional potential partner countries are mentioned and the deliberate complexity of the individual case studies should also clearly show that designing categories and a 5×5 matrix is not enough. Reality is always more complicated and is always in a state of flux. That is why a 2025 edition of the Partner-Atlas will differ significantly from the 2020 edition. The following articles are ultimately nothing more than a snapshot, an attempt to shed some light on the tangle of values, interests and potential partners that make up German foreign policy.

Peter Fischer-Bollin is head of the Analysis and Consulting Division.

Sebastian Enskat is head of “Democracy, Law and Parties” in the Analysis and Consulting Divison.

Laura Philipps was Policy Advisor for Multilateralism and Systemic Competition in the Analysis and Consulting Division.

1: Masala, Carlo 2016: Weltunordnung. Die globalen Krisen und das Versagen des Westens, C.H.Beck.
2: The basis for the definition of interests used here is the discourse on Germany’s foreign policy since reunification, including relevant literature and the few official documents that deal explicitly with strategic questions and Germany’s foreign policy interests, especially the so-called White Papers of 1994, 2006 and 2016.

PDF Download The Partner-Atlas is also available in digital format. 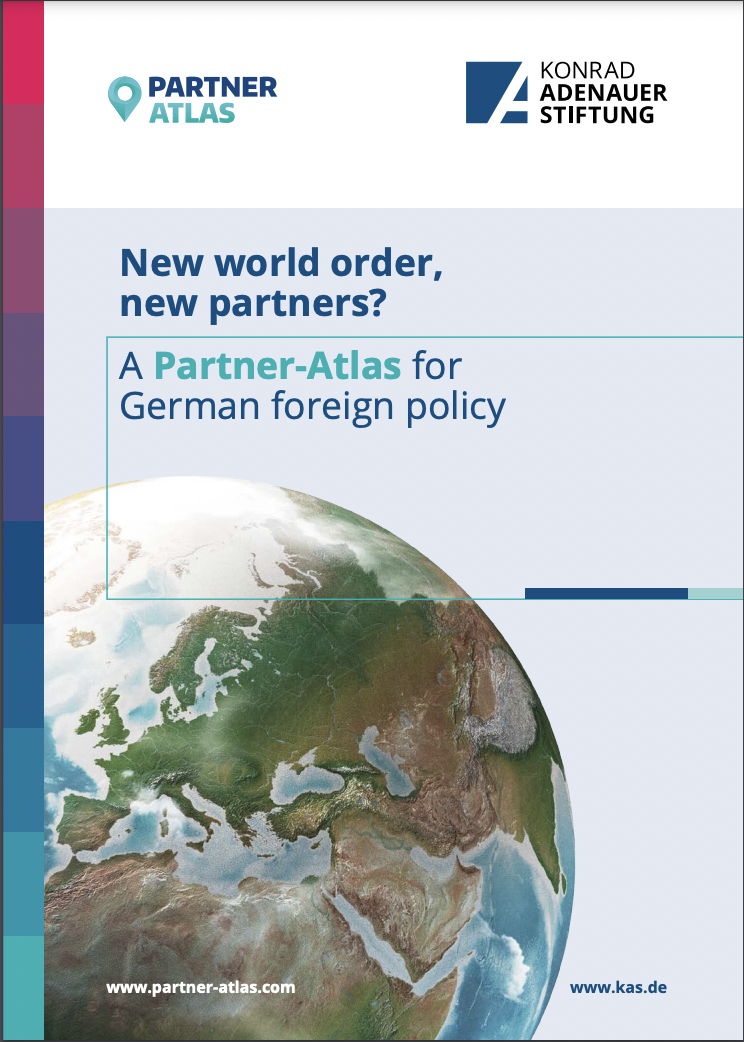 You prefer having the Partner-Atlas sent to you in printed form?

Please drop us a line and let us know where we should send it to.